In an extraordinary intervention in the campaign for the December 12 poll, Mr Trump suggested the Conservatives and the Mr Farage’s Brexit Party should form an electoral pact. He said: “I wish you two guys could get together, I think it would be a great thing.”

Mr Trump also enraged Labour by warning that a Jeremy Corbyn-led government would be “so bad for your country”.

During their conversation, Mr Trump, who is friends with both Mr Johnson and Mr Farage, called the Prime Minister a “fantastic man.”

He told Mr Farage: “I think he’s [Mr Johnson] the exact right guy for the time and I know you and him will end up doing something that could be terrific if you and he get together as, you know, unstoppable force.

Donald Trump said together Boris Johnson and Nigel Farage would be an ‘unstoppable force’ (Image: Getty)

Speaking on Mr Farage’s LBC radio show, Mr Trump said: “I’d like to see you and Boris get together ’cause you would really have some numbers, ’cause you did fantastically in the last election.

Turning his fire on Labour, Mr Trump said: “Corbyn would be so bad for your country. 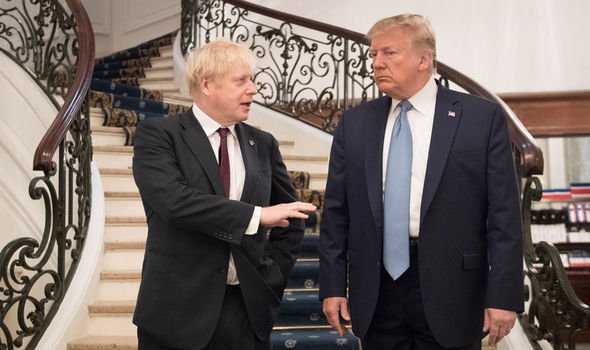 Donald Trump and Boris Johnson at the G7 Summit in Aufust (Image: Getty)

He also said of the hard-Left Labour leader: “I’m sure he’s a lovely man but, you know, he’s of a different persuasion, to put it mildly. Perhaps the opposite, he’s of the opposite end.”

Mr Farage, who was keeping tight-lipped yesterday about how many candidates his Brexit Party will field at the election, responded with his conditions. He said he would back Mr Johnson only if he dropped his current Brexit deal and pledged a clean break from the European Union.

He said: “Well I tell you what, if he drops this dreadful deal, fights the General Election on the basis that we just want to have trade with Europe but no political influence, do you know what? I would be right behind him.”

Mr Farage is expected to set out his election plans today amid reports the Brexit Party is split over whether to take on the Tories by fighting virtually every seat or concentrate their fire on Labour in Leave-voting areas.

Trump: US ‘can’t do’ trade with UK under Johnson’s Brexit deal

In another outburst, President Trump appeared to raise doubts over whether the US could strike a future free trade deal with Britain under the terms of Mr Johnson’s proposed Brexit pact with Brussels.

“I mean we can’t make a trade deal with the UK and we can be, because I think we can do many times of numbers that we’re doing right now, and certainly much bigger numbers that you’re doing under the European Union.”

“I know Boris wants to be very careful with that because under certain ways we’re precluded, which would be ridiculous.”

Mr Trump went on to deny claims from Labour that US private healthcare firms could take over the NHS under a future transatlantic trade deal.

“It’s not for us to have anything to do with your healthcare system”, he said. “No, we’re just talking about trade.

A Government source said: “The Prime Minister negotiated a new deal which ensures that we take back control of our laws, trade, borders and money – a deal which people said he’d never negotiate.

“Under this new deal, the whole of the UK will leave the EU Customs Union, which means we can strike our own free trade deals around the world from which every part of the UK will benefit.

“This election will allow voters to choose a parliament actually willing to get Brexit done.

“All Jeremy Corbyn can offer is two referendums next year and no leadership to take this country forward.” Mr Trump admitted he was “disappointed” that the UK failed to leave the EU on October 31.

“I think Boris is and I am and you are, we’re all disappointed”, he said. “I think it’s a good thing for the UK, the concept of what they’re doing, I was in favour of it originally”, he said.

He said he expected the UK to leave the EU before the next US presidential election in November next year.

How public perception has change on ‘important issues’ since 2015 Election (Image: Express)

“I think Brexit will happen first. I hope so. You should be able to knock that off”, Mr Trump said.

Last night an angry Mr Corbyn said: “Donald Trump is trying to interfere in Britain’s election to get his friend Boris Johnson elected.

“It was Trump who said in June the NHS is ‘on the table’.

“And he knows if Labour wins, US corporations won’t get their hands on it.