EU capitals are considering a unilateral exit clause from the controversial Northern Ireland backstop after a set number of years. Under the plans, the Northern Ireland Assembly would be handed a vote on whether to continue with or revoke the measure, as long as both communities in the province agree to it. This could essentially set a five-year time-limit to the backstop, which would be seen as a huge victory for the Prime Minister.

“A landing zone on consent could be a double majority within Stormont, to leave, not to continue with arrangements after X years,” a European source told the Times.

Under the new plan, the EU would require both nationalist and unionist communities to consent to the end of the mechanism.

Therefore, the bloc could cite their commitment to the Good Friday Agreement in order to make the offer.Mr Johnson’s proposals, which landed in Brussels last week, were shot down after the introduction of a consent mechanism, which the EU argued would essentially hand the DUP a veto.

The Prime Minister proposed that Northern Ireland would align itself with the EU’s single market but leave the customs union with the rest of the UK.

But in order for the new backstop to be implemented, Stormont would first have to agree and then would hold votes ever four years to decide whether or not to continue under EU rules.

Brussels believes the concessions could trigger Mr Johnson to once again move closer to the EU’s original offer of a Northern Ireland-only backstop, which saw the province remain in the bloc’s single market and customs union.

In return for the offer, EU leaders would expect the Prime Minister to allow Northern Ireland to remain in the EU’s customs union.

“With the consent mechanism there is no real political reason for the UK to have a separate customs border that is distinct from another regulatory border as Northern Ireland can decide,” the source added.

The offer is seen as a “landing zone for a deal before the weekend and make-or-break summit” of European leaders next week.

Jean-Claude Juncker greeting Michel Barnier during a meeting of the College of EU Commissioners in Brussels today (Image: REUTERS)

The offer has already received pushback from Brexiteers and the DUP, who have suggested Northern Ireland would be trapped inside the customs union.

Sammy Wilson, the DUP’s Brexit spokesman, said: “The double majority arrangement is designed to ensure we can never get out of the customs union, given all the other parties are supportive of staying in the EU.”

“I don’t think anyone who looks at it with any kind of objectivity at all will say it’s an improved offer.”

Tory MP Iain Duncan Smith said: “This looks suspiciously like the EU, realising they are about to look like the bad guys, making a tokenistic offer.

“This is about shifting blame to Boris Johnson.”

Ireland’s Leo Varadkar has previously opposed the idea of a time-limited backstop and enjoyed the full support of his fellow leaders.

Despite the apparent offer, Mr Varadkar has insisted it would be “very difficult” for a Brexit deal to be reached ahead of the summit.

He added that EU leaders would not accept a deal “at any cost”. 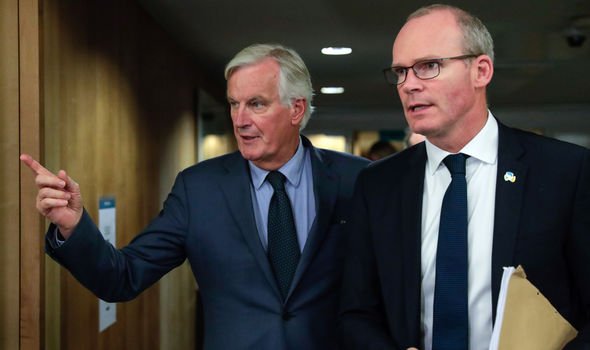 “There are some fundamental objectives that haven’t changed for the past three years and we need them guaranteed,” he told RTE News.

“I think it is going to be very difficult to secure an agreement by next week, quite frankly.

“Essentially what the United Kingdom has done is repudiate the deal that we negotiated in good faith with the prime minister May’s government over two years and sort of put half of that now back on the table and are saying, ‘that’s a concession’. And, of course, it isn’t really.”

Angela Merkel pictured today ahead of a cabinet meeting at the Chancellery in Berlin (Image: REUTERS)

Last night Brexit talks appeared to be on the brink of collapse after a tetchy phone call between Mr Johnson and Germany’s Angela Merkel.

The Prime Minister told his EU counterpart that the bloc was making “impossible” demands.

And after an angry discussion between the two, a Number 10 source suggested the UK can now never hope to agree a deal with the EU.

European Council president Donald Tusk accused the Prime Minister of playing a “stupid blame game” over the talks on the UK’s departure.

EU Commission president Jean-Claude Juncker backed up his colleague saying the EU was not responsible for the stalemate.

He added: “The explanation is actually in the British camp because the original sin is on the islands and not on the continent.”